Posted on December 6, 2017 by Emily Wasserman 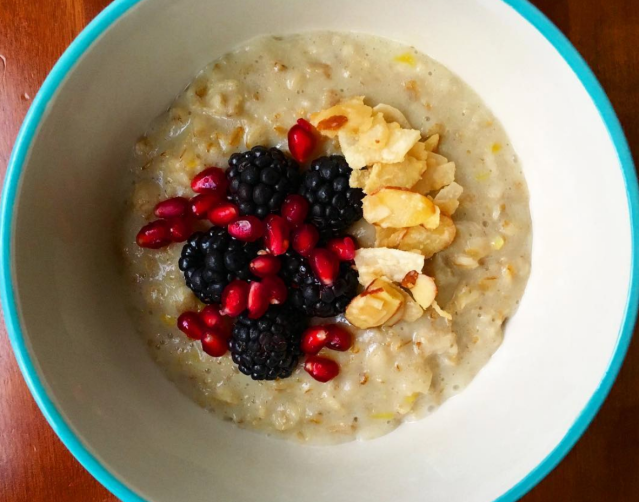 There was a breakfast buffet at our hostel in London and the kids went CRAZY. They piled their plates with bacon, eggs, and sausage. They looked like they were on that game show where you’re allowed to run down the aisles of the grocery store and shove as many items as you can into a cart, except they were shoving as many pieces of bacon as they could onto a plate.

I stuck with cereal and toast. When I sat down with my food, all the teachers looked at me strangely. “Don’t you want bacon and eggs?” they asked. They assumed because I was American/English-speaking, I’d want a savory breakfast. “No,” I said. “I like sweet things in the morning.”

“You’re more French than American,” one of the teachers said. She wasn’t wrong.

Nowadays my breakfasts involve less bread and more fruit, but sometimes I get a pastry or make cereal. Oatmeal is an American breakfast but whenever I make it, I make it as sweet as possible.

For this dish, I used up extra minced ginger I had after making carrot turmeric soup. Then I topped it with some maple-glazed almonds and coconut that I had leftover, too.

I’d highly recommend adding some berries on top. The tartness and sweetness pairs well with the spicy ginger and the smoky maple flavors in the bowl.

I don’t have anything against savory breakfasts, per se. I just like to start my day with sweet things. I think you’ll enjoy this oatmeal as much as I did.

Here’s a song that reminds me of this oatmeal and of sweet breakfasts. It showed up on my Top Songs of 2017 playlist, which is honestly me in a playlist.

Combine the ginger, oats, and milk in a medium saucepan and bring to a boil. Reduce the heat to low and cook the oatmeal, stirring occasionally, until it’s thickened. Stir in the maple syrup.

Serve with pomegranate seeds, berries, and some maple-glazed nuts. Enjoy!